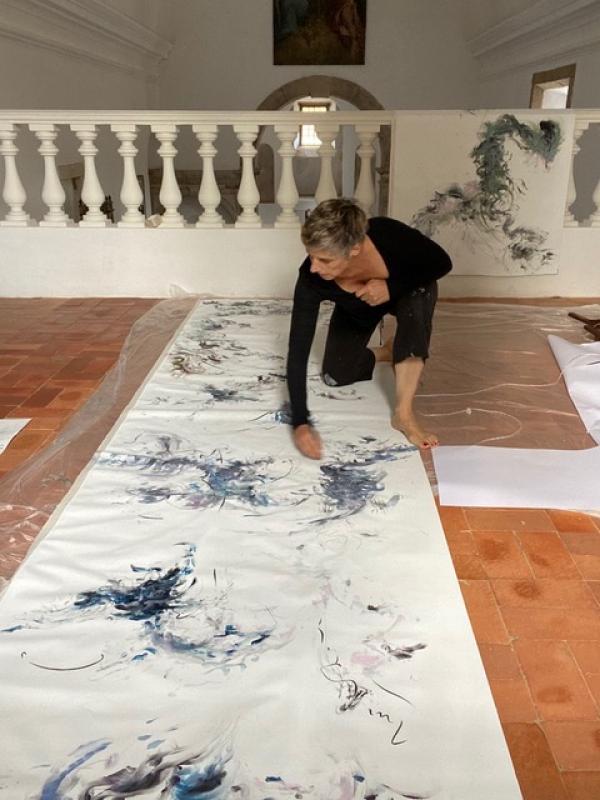 Anne Leigniel, French artist was born in Auxerre in Burgundy. She studied at the National Art School of Paris Cergy before doing an MA in photography at the London College of Printing in London. While photography was her main medium at the beginning of her career, she felt the need for a more physical experience for her and for to visitors traveling to her exhibitions. She started creating photographic installations and carried on working with an increasing number of mediums.
Her life and travels strongly inspire her work.    Anne uses elements that surround her to create her works. She uses local techniques and materials found wherever she is.
Art Residency in France made her start working with ochres colours (Echangeur22, 2015)
The practice of Kendo discovered during her stay in Japan where she lived 2 years, inspired several series of works. (Spirit of kendo, Higure Tokyo 2012). In Japan she also discovered the work of bamboo, and made outdoors installations with it (Tsukuba 2017, Sogenji Temple, Okayama 2018) or indoors back in London (QPark 2019).   In Brazil, she collaborate with Brazilians danseurs and musiciens (E22 ProjectP0 2016), In HK she invited local artists to work on a shared wall during 2 weeks (Charbon Art Space 2017)...
While traveling at sea, she made kites with Indonesian sailors, she flew painted sails in fields and mountains, she collaborated with artists and insects and played with the wind the trees and the waves...
Lightness mouvement and ephemerity are recurring themes in her work.  Using simple elements, in a minimal spirit, Anne Leigniel creates a poetic dimension allowing the breathing of spaces, the silences, inviting the spectator to a contemplative meditation.

During her residency at Convento Inn she has been working on two different bodies of work;

The Travel drawings on which she has been working for several years. When Anne Leigniel travels or commutes as a passenger she puts a drawing pad on her lap and draw the landscape in real time as it evolves before her eyes. She draws what she sees and what she sees is constantly changing. Somehow, lines representing the chosen elements of her journey become superimposed and an abstract atmosphere emerges. The title on each piece indicates where the drawing was started, where it ended, the date and the means of transportation. The size of the drawings (29x39cm) is dictated by the size of the artists backpack.  The area around Convento Inn became her playground to expend her series.

The Paintings is the second body of work she is working on which is mainly abstract intuitive drawing and painting adapted to the environment where she is working. In Coventinho, Annes studio was on the churchs mezzanine where she worked on super large long formats using the immense space of the church and inspired by the surrounding colours

Anne Leigniel has shown her work worldwide. Her art is in numerous private collections around the world and at the bibliothèque Nationale de France and the Woodstock center for photography. She has performed in many cities in Asia and in Europe with internationals artists.
http://www.anneleigniel.com